I think I probably did too good of a job on the hut boots.  He’s been showing them around and now I have orders.  Even saying that they have to BYO goose down wasn’t a deterrent.  Now DH has given a pair of 30 year old Goretex overmits and a manky pair of gaiters.  My next ‘challenge’ was to  create new ones.

After 30 years of use these have definitely seen better days.  The outer shell was  fine, but no longer waterproof.  The remains of the seam tape was only hanging on in a couple of places and the waterproof lining was crumbling away.  It was not very pleasant to handle the insides of the gloves as there was so much grit coming off the lining.  Even the Velcro on the tabs were starting to disintegrate.

Thankfully, I was allowed to cut them up to make a new pattern.  I unpicked the seams, sewn with a scant 2mm seam allowance and a heavy thread.  After ironing them flat, I trimmed the pieces back to the stitch lines and traced the pattern out.  Truing the seams on the thumb pieces was fairly tricky as the inside thumb piece wraps around the side of the thumb.  I used a 5mm seam allowance and trimmed it down after stitching

The palm, finger tips and inner thumb were cut from Tough Tex fabric which is a waterproof fabric with grippy textured rubber-like surface.  The other pieces were cut from 3-layer Goretex in a light grey.  I salvaged the OR logo from the original gloves and stitched them on to the new gloves.  I also reused the plastic loops.   Sewing the pieces together was reasonably easy, just using paper clips to hold the pieces as a couple use pins.  Each seam was sealed before stitching the next.

Applying the seam sealing tape was a tedious, frustrating and slow process.  Initially I tested a 3 layer Melco tape but the ToughTex was melting before the glue on the tape.  I switched to a 2 layer tape and had better results.   The tight curves at the top of the thumb and hand were particularly hard to manipulate in order to apply the tape.  Probably easier to use a sealing glue next time around.  But, I was able to fill them with water for an hour with no leaks appearing, so that was a relief. 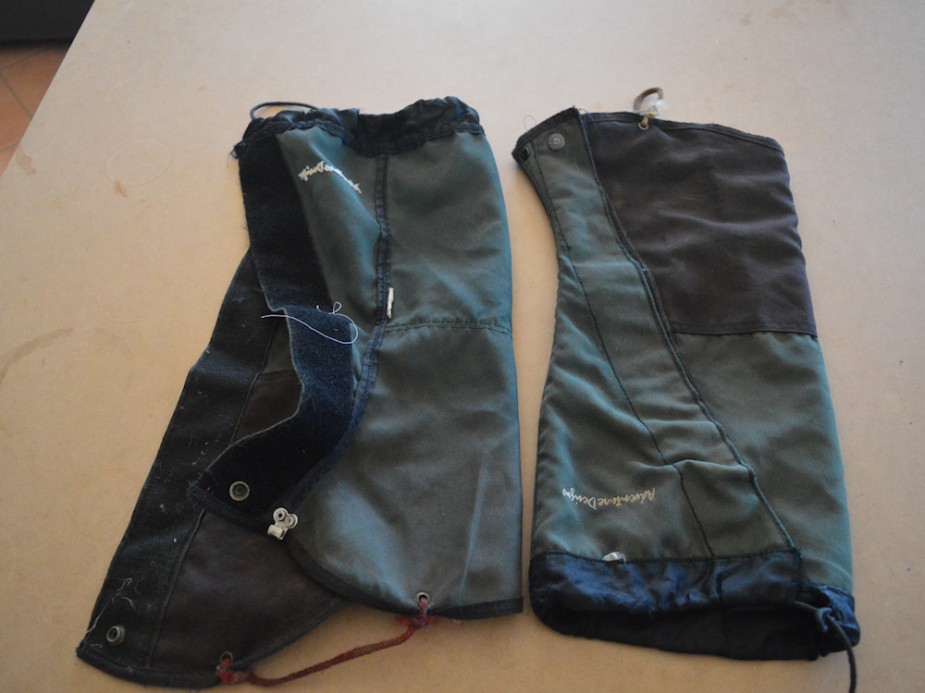 The design of these was much simpler than the gloves.  The velco opening twists around from the outside of the calf down to the tongue of the shoe.  He still wanted to keep these ones so I wasn’t allowed to pull them apart.  Since they were never waterproof to start with, I used the pin method to mark out the pattern for the pieces.  Once that was done, I could put in the adjustments he wanted:

For the lower section, I’ve used a heavy cordura with reflective printing and a coated backing.  The lower section is lined to protect the coating.  The upper is made from the same goretex used for the gloves.  All internal seams finished with sealing tape.  DH made up the hooks to clip the tongue onto the shoelaces, which is held on by two rivets.

The casing on the upper edge was a bit tricky as it doesn’t extend all the way along the top edge.  There is also a binding strip which goes along the edge.  Finished with a bit of bootlace to form the loop and drawcord.

I want to enjoy this photo of them as they will never be this clean in the rest of their hard life.  Not that I’m complaining, getting dirty means they are being used ( and abused) 🙂

There was an error retrieving images from Instagram. An attempt will be remade in a few minutes.