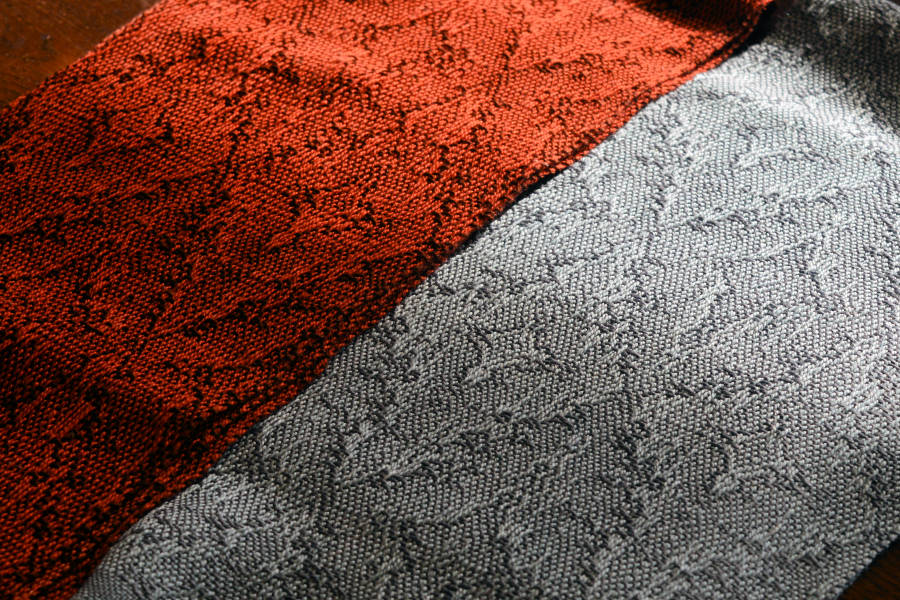 Setting up the first warp took an entire day.  I’m not the quickest at warping in the first place and the pattern was most more intricate that other weaves I’ve done.  Add to that the pattern is not symmetric.  I was really careful to check and recheck the threading.  I only had one threading error which in which the thread didn’t actually go through the heddle.

The loom took a bit of getting used to and I quickly realised how nice my big 4-shaft loom was with it’s wide shed, treadles and winding system.  On the plus side, I could easily  take this loom outside and weave in the sun – absolute bliss on a cold day.

The first scarf was woven over about 5 weeks, just doing a half or full pattern repeat at time.  The photos below shows how the pattern come up.  The texture of the scarf is quite amazing.

For the second scarf, I tied the new warp onto the first.  The knots jiggled through the reed and heddles without any trouble.  Tying the 164 knots was pretty tedious but so much quicker than rethreading.  I think it took about 2hrs with a few short breaks to have the new warp set up for weaving.  As I was tying them on, I could help thinking I’d seen the colour combination before  like on the rug and tiles 🙂

One of the problems I found with the weaving is that the pattern isn’t that obvious as it is being woven.  It shows up more as texture.  When you view it from the back of the loom, the pattern really stands out.  I wrote the treadling out onto a small sheet stuck to foam, and used a pin to mark my place as I worked through the pattern.  Normally, I can see the pattern and get used to the treadle sequence, but this was too complex.  Working from the pin-board allowed me to keep on track and I can only see one treading error in the finished scarves.  And after the first 10 repeats, you can get into the rhythm of it.  The second scarf was done and dusted over 3 days.

Here are the two side by side.  For the first (rust) one, I used a more open weft.  It ended up with a lot more texture than the second.  Both have a lovely light and silky feel.  And so ends my playtime with an 8-shaft loom.  I’ve returned it to it’s owner with the warp tied off so she can tie on her own warp.

The Squiggle Shirt
Just finished a thermal cycling jersey. It was meant for me, but he ended up scoring it.. The inspiration came from looking at some old cycling posters. The striped fabric is pieced into the plain white fabric, but isn't very obvious.
Almost done. I got brave enough last night to put the zip. And then finish off the collar facing and hem. Just need to decide if I do tabs on the sleeve cuffs or elastic with a casing.
Batching it.... I'm taking a break from my jacket to make a few merino jerseys. I cut out 3 watching yesterday's TDF stage. Tonight's job is to sow them up, ready for hemming and cut out the other two once I have some bench space again 👍
A little unconventional, but plastic coated paper clips work a treat for 'pinning' seams when you don't want the put holes in you fabric.
Stage5: Aussie win and I've cut the Goretex jacket out 🍾
Loading Comments...
%d bloggers like this: