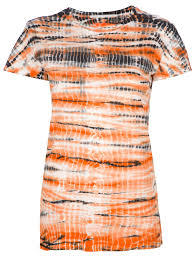 This project started off looking for a way to knock-off this Proenza Schouler t-shirt.  It is a tie-dyed t-shirt retailing around AU$400 on ShopStyle.  I just hope that most of the cost was involved in the labour to make the t-shirt, rather than the label.

My initial thoughts on how to replicate the patterning was to make horizontal accordion folds and then place rubber bands every 1- 1 .5”.  The dye would need to be applied in stripes, with a couple of contrast stripes thrown in.  My previous attempts at this type of tie-dye hadn’t worked very well, so I thought I’d have a look at a shibori technique called Mokume (woodgrain).  It is a stitched resist form of dyeing and creates patterns like you find in  ripples of sand at the beach.

The notes I was working from say to thread 5 needles, stitch each line in turn, leaving the needle attached.  The first 2 rows are gathered up and knotted, then the next two rows are stitched.  Then you just repeat this process all the way to the end.  Initially, I was gathering the threads as I went, but I was finding it awkward to work with.  So I stitched all the rows and then did the gathering up at the end.

I did the stitching over two weeks.  A bit each night in front of the TV.  It is a good way to use up left-over bobbin thread.  I found it strong enough to draw up the fabric.  There were a few lines that I worked using overlocker thread, and the threads broke as I pulled them up.  It was tedious to re-sew them and the folds were not as tight as the other lines.

Traditionally the fabric would then be placed in a dye bath.  Because I wanted to use different colours, I decided to use the solar dyes.  You will need a nice sunny day to do this.

When I was painting the fabric, I had a sinking feeling that it wasn’t going to look good, but I  was pleasantly surprised by how it turned out.  The orange dye is painted onto the back of the fabric, so it looks paler form the front.  Similarly, the blue is lighter on the back.  Both sides are a little different but I’m tending to like the reverse side better.  Because the stitching lines are further apart, the lines are a lot fatter than normal mokume.  There was one corner where I lightly applied the dye that looks like the traditional effect.   Where the folds have been a bit fatter, the sun-dyes have given it a bit of a watercolour effect.  It kind of reminds my of a sunset, with the sun just skimming the bottom of the clouds.

I couldn’t decide which face I preferred so I made the t-shirt up so it could be reversible.  Instead of using standard over-locked seams, I used flat-locked seams using blue thread on one side and burnt orange on the other.  The t-shirt looks a bit different to the one I set out to make, but I’m very pleased with the result.  Not your average tie-dye T