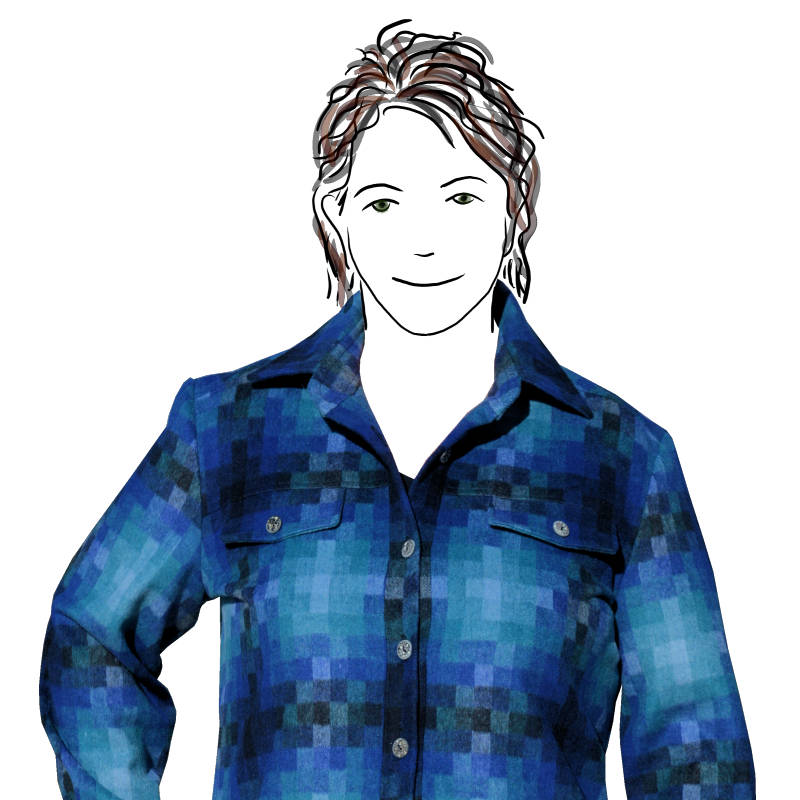 The pixel plaid shirt is finally finished and I’m so relieved at how it looks.  Quite a few years ago, I made a plaid shirt.  Spent ages getting the stripes to match for it to look really awful on me.   The ghost of that project kept haunting me as cut and sewed this shirt.  To my relief, I like the way the finished shirt looks.  It feels so cosy on and I know it will get a lot of wear.

In my last post, I wrote about deciding on the pattern for the fabric.  This post is mainly about the layout choices.

Laying the pattern out took most of a day.  It was painfully slow, made worse by indecision.   I decided to use the black bands as the dominant pattern and  place it on the centre front, down the centre of the sleeve and across through the yoke seam on the front.  I had to be a bit careful as to where the bright sections sat of the bust, but I think this placement worked OK (not too obvious, not too saggy).   Because of the nap, I didn’t want to cut the yokes or front bands on the bias.

I cut each piece as a single layer and started by laying the bigger pieces ( lower front, back and sleeve) and then I could use the rest to work in the smaller pieces.   The front went down first, then I marked off the grid pattern onto the front band and also to the side seam of the back.  The sleeve was matched to have the dominant band match at the bands on the front yoke and underarm.    I ended up widening the front band to have a finished width of two stripes.  This meant that the collar and collar stand was extended 1cm to match the new neckline length.

The front yoke matched up nicely, as did the pocket flaps.  I decided not to make a functional pocket and take the easy route of making the flaps decorative.  In the other two versions of made of this shirt, I’ve rarely used the pockets, so it wasn’t worth the hassle of putting it into this one.    The flaps were widened a little to line up with the bands in the fabric.

Placement of the back yoke left me head-scratching for quite a while.  Trying to like the shoulder point up with the dominant stripe on the sleeve, and also with the back.  The box pleat knocked the pattern off whack with the yoke.  Turning the yoke on the bias didn’t help, plus the nap  wasn’t right.  I did a dye test on a scrap piece to see it I could dying these sections black would be an easy option.  It did dye well, but  while I was waiting for the test piece to dry, I kept playing with the layout.  In the end, I matched the dark band to the sleeve and front yoke, and which left the darker blue running across the bottom of the back yoke.  I think this worked OK.


The collar was cut to match the vertical dark band at the centre back.  Again, I played around with options for the horizontal placement of the colours.  The collar stand was cut on the lighter colours and the collar cut on the darker.  The collar was cut upside down to make sure the nap ran the right way when the collar was folded down.  I think this arrangement worked out OK as the colour blocks flow nicely between the yokes and collar pieces.For the cuffs, I used the dominant stripe and just cut them longer to match up when they were sewn on.  The original cuff was to be folded up, but I changed this to have an edge seam so the nap ran the right way under the cuff.The last piece to cut out was the sleeve placket.  By this time I was really frustrated with it all and seriously thought about using plain black rather than trying to match the fabric.  In the end, I kept going.  I had to baste the placket edges before sewing them down to make sure the squares all lined up, but I got a really neat finish.

Sewing it up was relatively straight forward.   I little bit of hand-basting on the turn-backs of the collar and front band. For the most part, careful pinning was enough to have the squares all lining up.  For the hem, I used a bias binding finish.  This avoided having to turn a bulky hem , especially on the curved sections.

So, what do you think?  Do you think I placed the black sections in the right place or would you have done it differently?  I’d be curious to know.