Today’s project is a replacement for the spray skirt for the TK1. The current skirt came with the kayak when I bought it some 20 years ago. It was second hand then and already a veteran of a few Murray Marathons.   It has served it’s owners well but  has now mostly delaminated and parts of the waist casing have split.

The pattern has two parts – the deck and the tower.  The tower is in two pieces (seams at the centre front and centre back) .  The deck is one piece.  There is 1″ casing at the waist and around the base; loop at the front for quick release – although most times, if you tip this kayak, the deck comes off as you fall out.  To make the pattern, I cut the elastic and ironed out the creases around the casing and then traced around the outlines.

This is the pattern, with each square being 1″.  There is a 1″ seam allowance for the casing and 1/4″ on the internal seams.  The original skirt had reinforcing pieces on each side of the lap seam.  I’ve changed this to a pocket that will hold a flexible spar.  This should help to hold the lap seam up and shed water better.

Feel free to use the pattern ( and show me what you make).  But remember it is for a TK1 and may need to be adjusted to suit a different cockpit.

Total cost was less than $10, but I got the Goretex very cheap.  Much cheaper than a bought one.

When I was doing some snoop shopping for spray skirts, I came across a deck for a white water kayak that had an octopus print on it.  It looked really cool!  So I gave DH the choice of about 10 different designs that I thought would look good on the deck section and told him to take his pick.  He chose a dragonfly and wanted glow in the dark paint, but had to settle for silver instead.  It was possible but I would have needed to make a stencil to use the glow spray paint – lots of little circles – ugggh.  Much easier to use a marker with a template.

This is the easy bit. 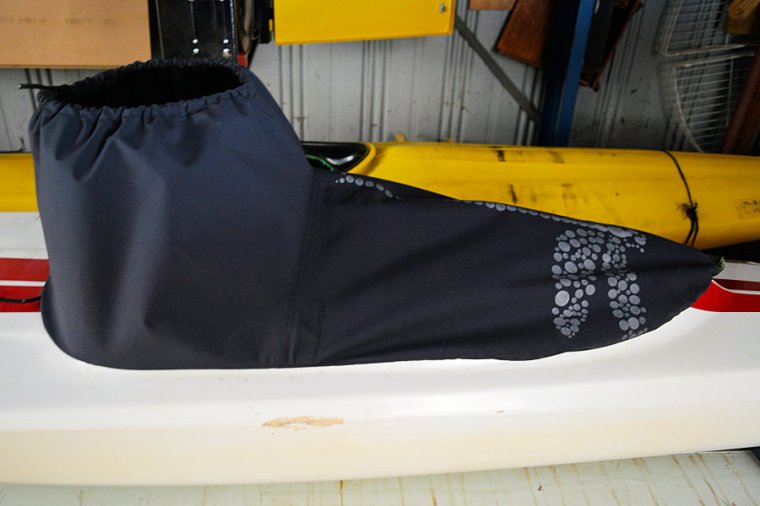