Has this project been fun or what?

I would never have thought that I would be weaving a rag rug, let alone be looking forward to making another.  To be honest, most of the ones that I’d seen were a random smattering of rag strips that didn’t really appeal to me.  But when I saw Karen Isenhower‘s project in Handwoven March/April 2017, it made me change my mind.  Her rug was gorgeous!

What finally pushed me over the edge on this project was when two of our single sheets became too threadbare to be used.  So rather than convert them to rags, I decided to use them to make this rug.  I must admit it was fun tearing them down into strips. 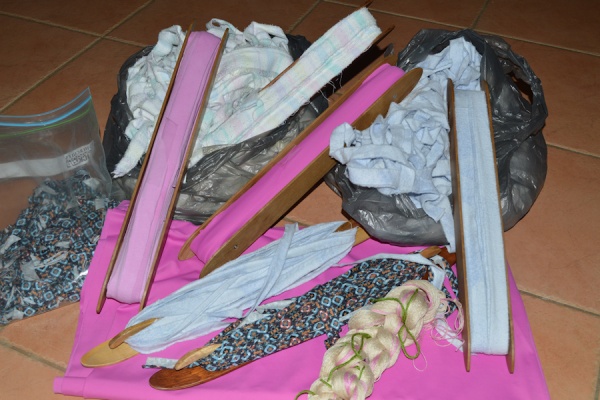 Both are flannelette, so the rug has a slightly suede feel.  The blue sheet had a subtle cloud pattern which gave a nice watercolour effect in the weave.  The other had coloured stripes on a white background.  I cut this one on the cross-grain to get the colours changing along the length of the strip.  I really like the effect it had in the weave as it reminded me of a heap of coloured mini-marshmallows.  Which is why I’m calling it the marshmallow rug.

For the other fabrics, used in the rosepath section and for the narrow bands, I’ve used left over knits – a light and strong pink, plus a print with browns/pinks/blues.  In all, there is about 6m of fabric crammed into this rug.  A great way to re-purpose fabric which would otherwise end up in landfill.

This was really quick to weave.  I spent more time trying to find the ‘safe place’ that I put the magazine in, that actually making the rug.  Really good fun beating the weft in as hard as I could, rather than having to be conscious of lightly placing the weft in like in the recent scarf project.

I’m very happy with how it has turned out and I’m itching to do another one.  There are a few bath towels that are almost end-of-life that might be reincarnated as a bathmat in the not to distant future 🙂

Him: They will see you coming in that 😄
Polo shirt is done. It actually went together fairly quickly once button tab went in. I used gold snaps instead of buttons, with I think gives it a touch of class.
My next project... polo shirt. Do you ever get a song running through your head when you are working on a project? I've got 'Sunshine on a rainy day' as today's earworm 🌞🌦
Sewing Bee sleeveless shell top.
Kayak jacket prototype....
I think this set turned out very well. The photos don't really do it justice as they don't pick up the shine from the gold and silver threads that well. Please swipe through to see some detailed shots
Loading Comments...
Comment
×